Book Review: A Good Marriage and 1922 by Stephen King 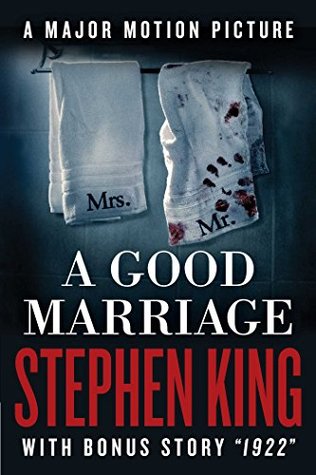 A Good Marriage: “What happens when, on a perfectly ordinary evening, all the things you believed in and took for granted are turned upside down?

When her husband of more than 20 years is away on one of his business trips, Darcy Anderson looks for batteries in the garage. Her toe knocks up against a box under a worktable and she discovers the stranger inside her husband. It's a horrifying discovery, rendered with bristling intensity, and it definitively ends a good marriage.”

1922: “1922 is a novella by Stephen King… The story opens with the confession of Wilfred James to the murder of his wife, Arlette, following their move to Hemingford, Nebraska onto land willed to Arlette by her father.”

It’s hard to review short story or novella collections, so I’ll look at each of them individually.  These two stories originally were in Stephen King’s short story collection Full Dark No Stars, but I read the edition containing only these two.  These two novellas that provide a mirror image exploration of marriage gone wrong...

A Good Marriage is the story of a happy middle-aged couple who have been married about 20 years.  Their lives are pleasant if a little boring and commonplace.  They have had a good life.  Then the wife stumbles (literally) across something that sends her life into chaos.

“A marriage was like a house under constant construction, each year seeing the completion of new rooms. A first-year marriage was a cottage; one that had gone on for twenty-seven years was a huge and rambling mansion. There were bound to be crannies and storage spaces, most of them dusty and abandoned, some containing a few unpleasant relics you would just as soon you hadn’t found.”

This was a chilling story that will prove that you never can really know all of someone.  *Shudder*
“Darcy moved through the rooms, pausing to look into the various mirrors.  Often for a long time.  Asking the woman inside that other world what she should do.  Increasingly the answer seemed to be that she would do nothing.”

In 1922, the marriage is anything but happy.

“The hate I felt toward her in that year of 1922 was greater than a man can feel for any woman unless love is a part of it.”

The story opens with Wilfred’s confession to killing his wife, Arlette and involving his son.  And his confession is a grisly one.  The story is really one of how that murder shaped his life from then on and colored everything, until it eventually taking everything from him, even his mind.

The more books I read by Stephen King, the more I am convinced that though his stories are almost always gruesome and gory, and though his characters are often the worst of people, he has a deep seated morality and great understanding of the fragility of each of our sanity.

See all my reviews @ www.mamaneedsabook.blogspot.com