GoodReads Description: Galaxy “Alex” Stern is the most unlikely member of Yale’s freshman class. Raised in the Los Angeles hinterlands by a hippie mom, Alex dropped out of school early and into a world of shady drug dealer boyfriends, dead-end jobs, and much, much worse. By age twenty, in fact, she is the sole survivor of a horrific, unsolved multiple homicide. Some might say she’s thrown her life away. But at her hospital bed, Alex is offered a second chance: to attend one of the world’s most elite universities on a full ride. What’s the catch, and why her?

Still searching for answers to this herself, Alex arrives in New Haven tasked by her mysterious benefactors with monitoring the activities of Yale’s secret societies. These eight windowless “tombs” are well-known to be haunts of the future rich and powerful, from high-ranking politicos to Wall Street and Hollywood’s biggest players. But their occult activities are revealed to be more sinister and more extraordinary than any paranoid imagination might conceive."


MY REVIEW:
Alex Stern is cursed. She sees dead people. ... er Grays. And because of this unique "gift" she has issues. Issues that land her in deep trouble. Along comes her knight in shining armor - Yale University and its secret societies. They can use her gifts and for her services they dig her out of the hole she has dug herself and give her a place at Yale. Poof! Brand new life!

Who else loves the idea of a book about Yale solely because of Gilmore Girls?? I think that Rory would have approved of this book. 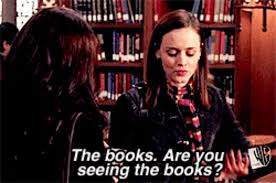 Anyways, Ninth House is a fantasy world made up of the real societies at Yale University. And that was pretty awesome because I LOVE when a fantasy book seemingly takes place right under our noses! As in the Harry Potter books, in Ninth House the magical world is just beyond our reach and we are constantly being saved from evils we know nothing about.

The societies' goal is not to save us common-folk however. They yield many powers that keep the elite, elite. Fame? Fortune? Power? Success? They've got it. And many abuse it. Alex exposes the seedy underbelly in her search for her missing mentor. I loved that it dealt with real issues under the guise of fantasy and that, while it got pretty out there at times, it took place inside of our regular old mundane world.

Excited for the next book!

YOU need this book if you are a fan of fantasy or Gilmore Girls... or both!
book review fantasy flatiron books gilmore girls leigh bardugo ninth house