Author Q & A with Amy Harmon 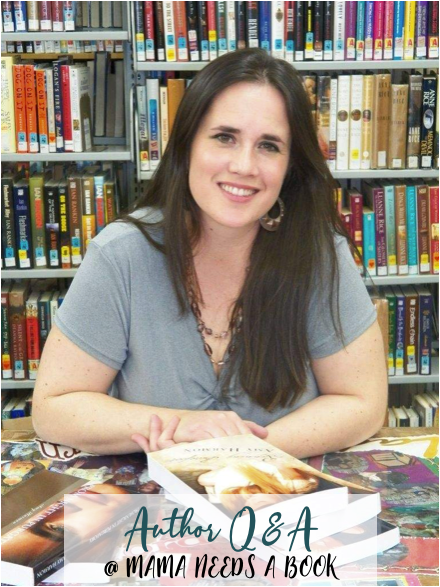 The Traveling Sisters were lovely enough to host and invite me to their group Behind the Pages with the Traveling Sisters!  So I had the great fortune to get to join in on a Q&A with Amy Harmon, author of Where the Lost Wander, What the Wind Knows, From Sand and Ash, and more!

Bio from Amy's GR page: "Amy Harmon is a Wall Street Journal, USA Today, and New York Times Bestselling author. Amy knew at an early age that writing was something she wanted to do, and she divided her time between writing songs and stories as she grew. Having grown up in the middle of wheat fields without a television, with only her books and her siblings to entertain her, she developed a strong sense of what made a good story. Her books are now being published in eighteen languages, truly a dream come true for a little country girl from Levan, Utah.

Amy Harmon has written fifteen novels including the USA Today Bestsellers, Making Faces and Running Barefoot, as well as The Law of Moses, Infinity + One and the New York Times Bestseller, A Different Blue. Her fantasy novel, The Bird and the Sword, was a Goodreads Book of the Year finalist. Her newest release, What the Wind Knows, is an Amazon charts bestseller. For updates on upcoming book releases, author posts and more, join Amy at www.authoramyharmon.com."

Hi Amy! Thank you for coming and answering our questions :) I am reading and loving Where the Lost Wander! I have a few questions for you:
Brenda -Traveling Sister wrote: "Let's get started right away with the idea for the story. You have a personal connection to the story and the characters. Can you tell us about that?"


Amy Harmon: My husband and I both enjoy genealogy, and the real John Lowry, the main male character in my story, is his ancestor. We didn't know much about him beyond the fact that his mother was Pawnee Indian. There was some question about whether his father was Cheyenne, but we know that it was a white man (a man also named John Lowry) who married his Pawnee mother and raised him in Missouri until the young John Lowry headed out west to make a future for himself. According to family history, he was "pale" enough to pass as a white man and because he'd been raised by one, he was able to live in a white man's world pretty successfully. Little is known beyond bare facts, but it gave me somewhere to start.

Lindsay - Traveling Sister wrote: "Hi Amy! Thanks for being here with us! I adored John and Naomi. Were their characters/personalities inspired by anyone?"

AH: John Lowry was inspired by my husband's five X's great grandfather, John Lowry. But his personality was formed from my own study, my own imaginings about a young man like John, with all of his challenges, would have formed and grown.


Naomi was tough in the way all the women in my family--particularly my mom--have been. Resourceful. Good. Smart. Determined. My mom's maiden name was May, and it was her ancestors that were my family's first pioneers.

Me: When did you know you wanted to be a writer?

AH: When did I know I wanted to be a writer? I don't know! I think I always just knew I was. I wrote to express my feelings from an early age. It was my medium. It was my art. Poetry, essays, letters, song lyrics . . . and eventually at the age of 35, my first full length novel. I wrote my first novel to see if I could, not to publish it, necessarily. Then life slapped me in the face and I needed to find a way to support my family and took my novel and just went for it, self-publishing the book without knowing anything at all about the publishing world. And here I am sixteen novels later.

Me: What authors (or books) would you say have had the greatest influence on your writing?

AH: As far as what books I like reading -- I like everything. My only criteria is it has to be well crafted (I can usually tell if an author has the chops in the first page) and I really prefer a romance at the heart, even if it's just faint. But there are great books in every genre, and I think the fact that I read everything as a child informs my work now. I like writing everything!

Me: I'm curious, as others are, what your writing process is? Do you outline a book from beginning to end?

AH: I plan them in part--meaning I know the history, I know the characters, I know the main struggle, the overriding difficulty, that will plague them.
I also know what it is each character desperately wants (or needs) so that their desire propels them (and me) forward. I don't outline each chapter or know each twist and turn, but I don't just start writing blindly either. I've usually assembled all my ingredients before I start "cooking."

Me: Did you do any traveling to research the places in your novel, Where the Lost Wander?  (Debra wrote: "Can you tell us more about the research that went into writing this book?")

AH: I have answered this in part in other comments, but for Where the Lost Wander, I found every pioneer account I could (I actually had some in my own family tree, though not John Lowry's) and read them several times. Then I studied the maps of the time and the landmarks and the terrain. I studied Washakie in depth and went to Wyoming to the Shoshoni lands. I visited parts of the trail and watched documentaries on the Overland trail and many early settlements. And then I started writing, constantly referring back to different records and maps so I could keep it all straight.

This time in history is actually looked at with a great amount of derision. We tend to judge people in groups, and depending on who is out of favor in society, their history gets derided or scorned. I think the thing that writing and studying history has revealed to me is that people are just people. Good, bad, selfish, saintly. Painting all history or all people in big strokes of blame or condemnation is unfair and it also robs us of the lessons of history. There is so much to learn and appreciate in historical fiction. It teaches us about ourselves. It helps us ask questions. It helps us forgive and forge ahead on better paths. I would hope that readers will not only be entertained and edified by my stories, but that they will learn about themselves too.

Me: Thank you again for taking the time to answer our questions!

My reviews for Amy Harmon's books: