Guys guess what??!! It's THRILLING THURSDAY!!

This week's topic is Thrilling Authors that Never Disappoint!! If you want to join in the fun (please do!) just link up your latest review for a favorite author of yours!

And please consider following my blog and linking back to this link up on your blog :)

I've got to list more than one because my #1 is just all-too-predictable.

About the Author (from GR): "Stephen Edwin King was born the second son of Donald and Nellie Ruth Pillsbury King. After his father left them when Stephen was two, he and his older brother, David, were raised by his mother. Parts of his childhood were spent in Fort Wayne, Indiana, where his father's family was at the time, and in Stratford, Connecticut. When Stephen was eleven, his mother brought her children back to Durham, Maine, for good. Her parents, Guy and Nellie Pillsbury, had become incapacitated with old age, and Ruth King was persuaded by her sisters to take over the physical care of them. Other family members provided a small house in Durham and financial support. After Stephen's grandparents passed away, Mrs. King found work in the kitchens of Pineland, a nearby residential facility for the mentally challenged.

Stephen attended the grammar school in Durham and Lisbon Falls High School, graduating in 1966. From his sophomore year at the University of Maine at Orono, he wrote a weekly column for the school newspaper, THE MAINE CAMPUS. He was also active in student politics, serving as a member of the Student Senate. He came to support the anti-war movement on the Orono campus, arriving at his stance from a conservative view that the war in Vietnam was unconstitutional. He graduated in 1970, with a B.A. in English and qualified to teach on the high school level. A draft board examination immediately post-graduation found him 4-F on grounds of high blood pressure, limited vision, flat feet, and punctured eardrums.

He met Tabitha Spruce in the stacks of the Fogler Library at the University, where they both worked as students; they married in January of 1971. As Stephen was unable to find placement as a teacher immediately, the Kings lived on his earnings as a laborer at an industrial laundry, and her student loan and savings, with an occasional boost from a short story sale to men's magazines.

Stephen made his first professional short story sale ("The Glass Floor") to Startling Mystery Stories in 1967. Throughout the early years of his marriage, he continued to sell stories to men's magazines. Many were gathered into the Night Shift collection or appeared in other anthologies.

In the fall of 1971, Stephen began teaching English at Hampden Academy, the public high school in Hampden, Maine. Writing in the evenings and on the weekends, he continued to produce short stories and to work on novels. "


Reviews by Me:
Rose Madder
The Shining
1922 and A Good Marriage
Misery
The Stand

Quote(s): "We make up horrors to help us cope with the real ones." - Stephen King

About the Author (from GR): "Gillian Flynn is an American author and television critic for Entertainment Weekly. She has so far written three novels, Sharp Objects, for which she won the 2007 Ian Fleming Steel Dagger for the best thriller; Dark Places; and her best-selling third novel Gone Girl.

Her book has received wide praise, including from authors such as Stephen King. The dark plot revolves around a serial killer in a Missouri town, and the reporter who has returned from Chicago to cover the event. Themes include dysfunctional families, violence and self-harm.

In 2007 the novel was shortlisted for the Mystery Writers of America Edgar for Best First Novel by an American Writer, Crime Writers' Association Duncan Lawrie, CWA New Blood and Ian Fleming Steel Daggers, winning in the last two categories.

Flynn, who lives in Chicago, grew up in Kansas City, Missouri. She graduated at the University of Kansas, and qualified for a Master's degree from Northwestern University.

'Gillian Flynn is the real deal, a sharp, acerbic, and compelling storyteller with a knack for the macabre.' –Stephen King"

Reviews by Me:
Unfortunately, I read all of Gillian Flynn's books before this blog existed...

Quote: "She’s easy to like. I’ve never understood why that’s considered a compliment - that just anyone could like you." ― Gillian Flynn, Gone Girl

About the Author (from GR): "J. P. Delaney is the pseudonym of a writer who has previously published best-selling fiction under another name."

Quote(s): “How do we ever trust each other again, when we both know how good we are at lying?” ― J.P. Delaney, Believe Me 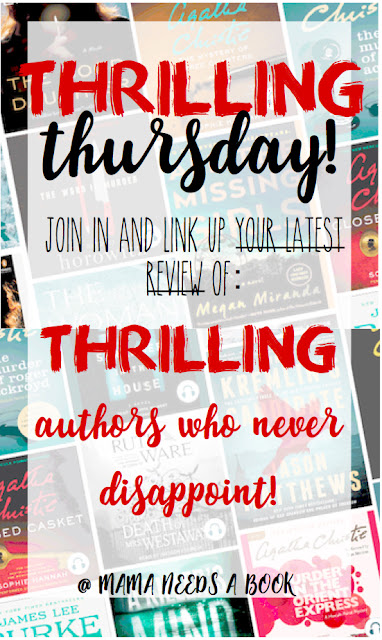 Alright, I showed you mine - now show me yours!! Link up below!  Link-up party starts Thursday at 12 AM on the dot!!


You are invited to the Inlinkz link party!
Click here to enter

Hey guys!! We are still getting quite a bit of traffic and not as much links so... I've decided I'm changing up Thrilling Thursday to make it easier for people to participate!
So, instead of each week doing a different list of 10 books, you can just link up your latest book review that fits the topic!! (or even just your latest book review or post you'd like to get traffic to).  That's right!  You already have the post done, so might as well link up right??? This linkup is still specifically for THRILLERS!! (mysteries, suspense, horror, crime, etc.) And now that it's so easy - Please, join in the fun!

All you have to do is link up below to a post you've already created!  And please consider linking back to this page in your own post!  Then, follow me so you don't forget to link up each week :)

So, this week the topic is Thrillers That Need A Movie!! What thrilling book have you read lately that you think really needs a movie?? Or better yet a mini-series? (The…

Welcome to...
THRILLING THURSDAY is a link-up specifically for my personal favorite genre: thrillers!!!
` Thanks so much for joining me! Also know, I'm using the term "thriller" a little loosely: feel free to reference books that are borderline thriller mysteries, horror, etc.  It's all in good fun.  Click here to see a list of upcoming topics!
Today's topic is TEN 5 STAR THRILLERS YOU'VE READ RECENTLY!!  We all know that there is a difference between five stars and FIVE STARS!!! It's subtle, but sometimes a book is super good and sometimes it is LIFE CHANGING, CAN'T PUT IT DOWN, CAN'T SLEEP, CAN'T EAT, THINK ABOUT IT YEARS LATER kind of good!